How much can I save with geothermal?See The Savings

Are you worried about the quality of your home’s air?

There can be a lot of dirt, debris, and bacteria floating around in your home. This can cause a number of health issues for your family. We carry two different Ultraviolet Energy Light systems that can control the overgrowth of invisible micro-organisms, such as viruses, bacteria, molds, fungi, and other bioaerosols.

When Ultraviolet Energy Light is mixed with Ozone they come together to make two powerful agents that can help eliminate harmful bacteria and allergens in your home.

The solution to indoor air pollution concerns is to duplicate nature’s outdoor controls indoors. Ultraviolet energy and ozone can be created by using high output ultraviolet lamps positioned inside your existing ductwork.

We can provide systems that accommodate just the germicidal lamps, or both germicidal and ozone-producing lamps

Unlike stand-alone “air purifiers” that cannot circulate air, our systems are installed in your ductwork and take advantage of the concentrated air that is passing through the ducts.

As the cooled or heated air is forced through the ducts and passes in front of the ultraviolet light,
microorganisms are killed or disabled.The duct mount system uses one or two patented U-shaped dual wavelength ultraviolet lamps. Ultraviolet-C light measures at 254 nanometers and is the germicidal range (UVC), which is commonly called “UVC.”

Its primary use is for the destruction and control of bacteria and other microorganisms in the air. The U-shaped lamp and reflective mirror on our systems increase the intensity of the high output lamps allowing them to deactivate and control a higher percentage of microorganisms on every pass.

Multiple pass effectiveness is the highest in the industry. The second wavelength of light produced by the lamps is measured at 185 nanometers and is commonly referred to as UV or ozone. Its primary use is to oxidize toxic compounds and gasses for a safer and odor-free environment.

Too Much of A Good Thing is Bad

It is common knowledge that high levels of anything is dangerous, but in small quantities, it can be helpful.

For example, swimming pools are cleaned with chlorine bleach to prevent harmful bacteria and algae from growing. But you wouldn’t fill the whole pool up with bleach, you only need a small amount of chlorine to keep the water clean, clear, and healthy.

This is the same concept we use with ozone. Low levels of ozone in our air is safe and even beneficial to our health. But, if you have high amounts, above EPA and OSHA safe levels, ozone can be an irritant and cause negative health effects.

It’s all about control. With a UV Light unit you’ll be completely safe and will see the health benefits associated with a cleaner home environment. 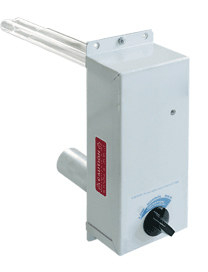 Our UV Light units are installed in your ductwork and produce low levels of ozone inside the ducts, not in the living area. As the ozone lamp does its work of oxidizing toxic compounds and gases carried by the air flow, it breaks down into harmless component molecules.

The UV Light is certified by the American Institute of Toxicology to produce only safe levels of UV (ozone).The EPA states that safe levels of ozone measure at .05 ppm (parts per million) or less in an indoor air environment. OSHA’s safe levels are .10 ppm in the workplace for an 8 hour period. Purdue University, Department of Botany and Plant Pathology published a study on the testing of the OxyQuantum system within a typical air handling duct system.

Conclusion: The data clearly indicate that trivalent oxygen inhibits spore production by Aspergillus flavus at concentration below the safety levels set by the Occupational Safety and Health Administration (OSHA); 0.05 ppm for a 24 hour exposure and 0.1 ppm for an 8 hour exposure. In fact measurements taken at 10 feet away from the OxyQuantum inside the duct were reported at .03 ppm.

Learn the most common geothermal design and installation errors that have led to customer complaints. When you know what to look out for, you can make sure you get the most efficient system that will save you serious money.